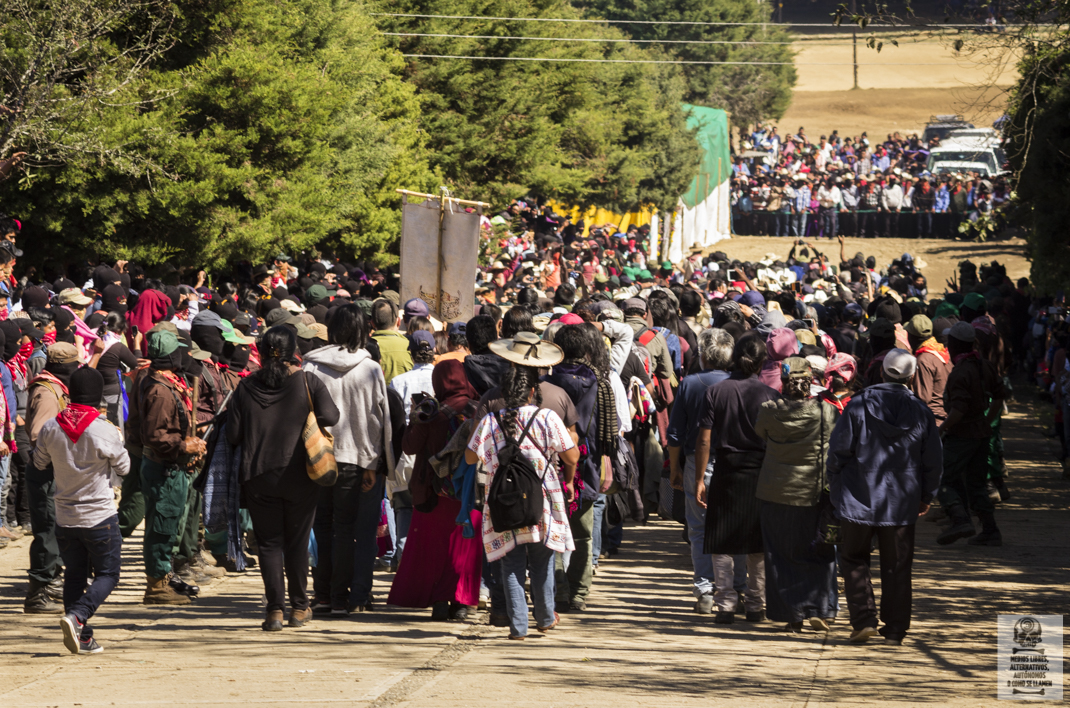 Our collective experiences of autonomy, born from the resistances and rebellions we are, have taught us that exercising autonomy in practice is not only a decision that is consequent with the struggles from below that we have kept from what we are, without selling our objectives and just causes for struggle, without giving up despite tumbles, repression, plunder that never ends, disqualifications and division. Without giving up nor sitting down to rest, because that would be like waiting for our collective death.

These resistances and rebellions are forms of self-government in each of our territories, they are collective works, they are our own forms of security and justice, of agriculture and defense of traditional crops, of our own forms of education and communication. These forms of agreement and consensus, this civilizatory proposal, governed by the 7 principles that guide us and have given precise answers to the grave problems afflicting not only our regions but the whole country, is our proposal to the whole nation.

The struggle of the National Indigenous Congress is anticapitalist, from below and to the left. In these times where the capitalist hydra advances and devours everything within its reach, we have decided that the time of the peoples has come to make this country vibrate with the beating of the heart of our mother earth. Because caring for life and dignity is our obligation, to which we can only answer collectively.

In October 2016, during our V National Indigenous Congress in San Cristóbal de las Casas, Chiapas, we decided to carry out a consultation in all of our peoples, tribes and nations to decide about the proposal emanated from the CNI to conform an Indigenous Governing Council whose word would be materialized by an indigenous woman, delegate of the CNI, that would enter the 2018 election process for the presidency of Mexico as an independent candidate in the name of the peoples of the CNI and civil society. The result of the consultation was the approval of the proposal in December 2016, with the participation of 523 communities from 43 indigenous peoples and from 25 states of the country.

We ratify that our struggle is not for power, we are not searching for it; rather we will call all originary peoples and civil society to organize ourselves to stop this destruction, to strengthen our resistances and rebellions, that is, the defense of the life of every person, every family, collective, community or neighborhood.

Do not be confused, we do not pretend to compete with political parties, because we are not the same, we are not their lying and perverse words. We are the collective word from below and to the left, that shakes the world when the earth trembles with epicenters of dignity and autonomy.

That is why in the next assembly of the National Indigenous Congress, to be held May 26-28 of 2017 in San Cristóbal de las Casas, Chiapas, the peoples that integrate the CNI will constitute the Indigenous Governing Council (CIG), as part of what was agreed in December 2016.

The Indigenous Governing Council is the core of CNI’s proposal to Mexico and to indigenous peoples. It is the form in which we will organize ourselves nationwide from below and to the left to govern this country, from an other politics, the politics of the peoples, of assembly, of the participation of every man and woman. It is the form in which peoples organize ourselves to take decisions about the issues and problems that involve all of us. It is the other form of doing politics, from horizontality, from collective analysis and decision-making.

The CIG will be guided by the 7 principles of CNI: to serve, not serve oneself; to build, not destroy; to obey, not command; to propose, not impose; to convince, not defeat; to go from below, not from above; to represent and not supplant.

The CIG will be integrated by one councilman and one councilwoman from each people and language of the different regions where the peoples, tribes and nations that conform the CNI are located. These council members will be elected by use and customs in their assemblies and/or spaces of decision-making, and will assume the commitment of actively participating in this space, carrying back to their assemblies the proposals and actions that emanate from the CIG.

The CIG will not impulse a candidate, but a spokeswoman.